The following text describes what node operators needs to do to upgrade their nodes before antelope is activated on the WAX testnet.

All node operators should have updated their testnet nodes before December 21st, 2022 11:00 UTC as after this time, The WAX Testnet will start the upgrade to Antelope. You should also begin to upgrade your Mainnet nodes as that will soon follow, more on that later.

Note that the upgrade is delayed to ensure we sync everything.

TLDR: If you run wax 2.0, upgrade to antelope and start from a snapshot.

These changes to plugins have been made:

Nodes that use these plugins must adapt their solutions prior to activation, ideally immediately.
Operators can migrate their solutions to services like Hyperion, Chronicle or dfuse.
eosio::trace_api_plugin and eosio::state_history_plugin can be used to index data to those solutions.

wax-leap 3.1 is based on WAX 2.0, so upgrading nodes from WAX 2.0 is straightforward.
You should use a snapshot when upgrading in that case.

Figure 1, Table of steps the nodes running 2.1 must take depending on their configuration (cells highlighted in yellow and red represent steps that can take weeks to complete) 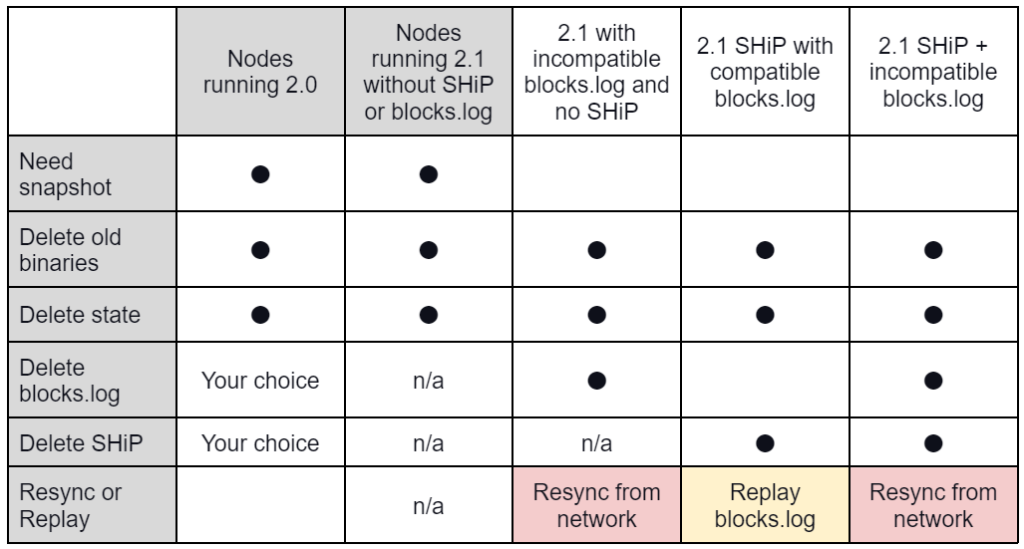 2. Preparing your node for upgrade

2.2 Getting a snapshot (if you need one)

If you are running wax 2.0 (but not wax 2.1), you can generate a snapshot from within a local node by using the command:

To perform a snapshot, nodes must be started with the configuration option: plugin = eosio::producer_api_plugin
Make sure your node is not exposed to the public when enabling the producer_api_plugin as it is only for administrators.

You can also download snapshots from a trusted guild.
Be aware that there is no way for a node to verify the integrity of these snapshots.

These config settings needs to be removed:

The Block log splitting feature from 2.1 has been removed and changed to log block rotation.
Remove the following parameters:

Any nodes currently running wax 2.1 should remove the state history.
From the data directory, delete files from the /state-history directory using:

Any nodes that have block log version 0004 from 2.1 should remove Block logs from the data directory, delete files from the /blocks directory using:

pass --snapshot <path/to/snapshot> flag if you are starting from snapshot. otherwise start your node as usual.

3. Features and tools to be aware of

Allows API nodes to resubmit lost transactions additional times until they appear in a block or expire.

For background, when a user connects to an API node and sends a transaction to the network, there is no guarantee that the transaction will successfully make it into a block.
Many issues, such as subjective billing or geographic latency, can prevent the propagation of a transaction across the network to the active block producer. One way to solve these issues is to allow API nodes to track transactions for inclusion in the blockchain and retry transactions that block producers did not publish in a block.

Allows nodes to share the finality status of a given transaction. It also returns snapshots of the current chain state.

One of the most common functions developers implement in their smart contracts is to check a transaction’s finality status. With current tooling, each developer must build a custom solution. The need to build and rebuild transaction finality status increases development time and adds a vector for smart contract exploits and bugs. There is great value in allowing nodes to provide this transaction finality information directly.

This feature allows nodes to share snapshots of the current chain state. Nodes with this feature enabled can store transaction status and open a new endpoint to query that status. It returns a status of UNKNOWN if the transaction does not appear in the chain.

Because the WAX chain only charge accounts when a guild publishes a transaction to the blockchain, failed transactions are effectively free, sometimes leading to abuse. The three-strikes rule and the subjective billing tool reduce the failed transaction load on nodes, but introduce user experience hurdles. Leap introduces adjustable subjective billing and three-strikes parameters to mitigate these user experience hurdles.

The previously hard-coded limit of 3 is now configurable to any number of failures.
In addition, accounts that have been whitelisted with the disable-subjective-account-billing option no longer encounter the max transaction failure limit.

This previously hard-coded decay of 24 hours is now configurable.

The v3.1 release introduces a new transaction endpoint that includes a detailed failure report with embedded transaction exceptions when a transaction fails.

This detailed report is the transaction failure trace.
Do not mistake this report for a successful transaction trace.
You may want to verify the receipt and except fields to ensure transaction success.

3.2 Additional wax-leap upgrades that are not focused on transaction lifecycle include:

The Contract Development Toolkit (CDT) has been upgraded, and anyone using this tool should be aware of some minor naming changes

The below parameters are for upgrading any eosio chain to antelope.

Compile version v3.1.1 contract: https://github.com/eosnetworkfoundation/eos-system-contracts/releases/tag/v3.1.1
before deploying the contract. we need to enable CONFIGURABLE_WASM_LIMITS2,BLOCKCHAIN_PARAMETERS and WTMSIG_BLOCK_SIGNATURES:

After those have been enabled you can deploy the contract.

4.2 Activate the rest of the features

To get the a list of the digests of protocol features, run

and then look for feature_digest field for each protocol feature.

Features that needs to be activated

Allows contracts to check if an account has a contract, the contract’s hash, and how many times the code has changed.

Enables new set_action_return_value intrinsic which sets a value that is included in action_receipt.
Allows actions to return values in the action trace.

System Contracts v3.1 needs a special boot contract too bootstrap the chain before the real system contract can be deployed.

This is needed because v3.1 system contract needs CONFIGURABLE_WASM_LIMITS2 and BLOCKCHAIN_PARAMETERS to function. And those are not enabled on a new chain. The boot contract can be used in that case to just enable those features before deploying the real contract.
Steps to bootstrap a new blockchain:

Information has been taken and modified from the following sources.

Thanks to EOSNetwork for developing leap and providing the initial documentation for upgrading to leap 3.1

Instead of installing the bsdmainutils package for hexdump – most systems probably already have the venerable ‘od’ utility installed. You might want to just try the command ‘od -x /blocks/blocks.log | head -1’ before installing that.